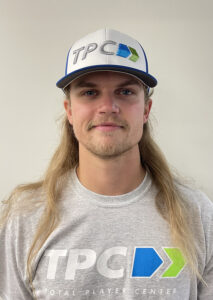 Matt was born and raised in small town Iowa where he started playing baseball at a very young age. He played little league and eventually made his high school team as a pitcher and first baseman! Right before his senior year, Matt moved to the Bay Area due to a job change with his parents. Matt eventually found his way to TPC as a student in the power throwing program back in 2015 and quickly became one of the top students and the first to join the 100 mph Happy Gilmore In n Out Club!

Matt became a pitcher only when he moved to California. He attended Cal High and got an offer to play at Cal State East Bay. Matt ended up redshirting at East Bay to develop and get stronger due to illness he had suffered before the season. Matt then decided that he wanted a change and transferred to San Diego Mesa college, where he ended up closing games. Matt ended up transferring out of Junior College after his first season to play at Minot State University (D2 in North Dakota). During his time there, Matt set many velocity records through the program that they had there, however his velocity was not his main weapon. Matt’s curveball quickly became his go to pitch as he learned to locate it extremely effectively. He used it as a primary pitch to make his fastball even more effective. Matt eventually developed and got his fastball up to 92 mph (sat 89-90) during his time in college. Matt ended his career with a 2.89 ERA

Matt comes to TPC as a great addition to the team! Matt has quite a bit of coaching experience for only graduating college in 2021. During his time in Minot, ND, Matt coached a local high school legion team during the summers. He was the pitching coach and first base coach for them during his time there. His main focus was to develop a throwing program. Believe it or not, it gets cold in North Dakota, so players there don’t have the luxury of playing outside all year round. This caused many inefficiencies in many of the players’ throwing and pitching mechanics. Matt’s program effectively improved their mechanics and every player saw improvements in their level of play on the mound, as well as jumps in velocity.

Matt also has a lot of experience with 1 on 1 training. During his final year of college, Matt took on internships with the strength program on campus, a baseball training facility, and a gym in Minot, ND. Matt would give lessons at the baseball training facility, as well as worked with athletes in every sport in the strength and conditioning program.

After graduating, Matt moved back to San Diego and worked for another baseball facility. During his time there, Matt coached travel ball teams at all levels, gave private pitching lessons and assisted with a velocity training class.

Matt is now back here at TPC as an instructor! He will be working with the baseball pitching classes as well as doing private lessons!